Jiaozi, the world’s first paper-printed currency, an innovation of the Song era (960-1279).

Due to structural weaknesses of traditional Chinese law, Chinese financial institutions focused primarily on commercial banking based on close familial and personal relationships, and their working capital was primarily based on the float from short-term money transfers rather than long-term demand deposits. The modern concepts of consumer banking and fractional reserve banking never developed among traditional Chinese banks and were introduced to China by European bankers in the 19th century.

Royal inscribed board, saying “Financial exchange all over the world”, in Rishengchang, Pingyao

An early Chinese banking institution was called the draft bank or piaohao (票号) in Chinese, also known as Shanxi banks because they were owned primarily by Shanxi merchants. The first “piaohao” Rishengchang originated from Xiyuecheng Dye Company Pingyao in central Shanxi. To deal with the transfer of large amounts of cash from one branch to another, the company introduced drafts, cashable in the company’s many branches around China. Although this new method was originally designed for business transactions within the Xiyuecheng Company, it became so popular that in 1823 the owner gave up the dye business altogether and reorganised the company as a special remittance firm, Rishengchang Piaohao. In the next thirty years, eleven piaohao were established in Shanxi province, including Pingyao and neighboring counties of Qi County, Taigu, and Yuci. By the end of the nineteenth century, thirty-two piaohao with 475 branches were in business covering most of China, and the central Shanxi region became the de facto financial centres of Qing China.

All piaohao were organised as single proprietaries or partnerships, where the owners carried unlimited liability. They concentrated on interprovincial remittances, and later on conducting government services. From the time of the Taiping Rebellion, when transportation routes between the capital and the provinces were cut off, piaohao began involvement with the delivery of government tax revenue. Piaohao grew by taking on a role in advancing funds and arranging foreign loans for provincial governments, issuing notes, and running regional treasuries.

Qiánpù stringing cash coins, which was a typical service offered by the qianzhuang (“money shops”) in imperial China.

Independent of the nationwide network of piaohao there were a large number of small native banks, generally called qianzhuang. These institutions first appeared in the Yangzi Delta region, in Shanghai, Ningbo, and Shaoxing. The first qianzhuang can be traced to at least the mid-eighteenth century. In 1776, several of these banks in Shanghai organised themselves into a guild under the name of qianye gongsuo. In contrast to piaohao, most qianzhuang were local and functioned as commercial banks by conducting local money exchange, issuing cash notes, exchanging bills and notes, and discounting for the local business community.

Qianzhuang maintained close relationships with Chinese merchants, and grew with the expansion of China’s foreign trade. When Western banks first entered China, they issued “chop loans” (caipiao) to the qianzhuang, who would then lend this money to Chinese merchants who used it to purchase goods from foreign firms. It is estimated that there were around 10,000 qianzhuang in China in the early 1890s.

There were several financial crashes which occurred in China during which a large number of qianzhuang closed, the largest of these occurred in the years 1883, 1910, and 1911. By and by the traditional qianzhuang banks were being replaced by modern credit banks in China, particularly those residing in Shanghai. This would continue to happen well into the Republican period. The last qianzhuang banks were nationalised in 1952 by the government of the People’s Republic of China.

British and other European banks entered China around the middle of the nineteenth century to service the growing number of Western trade firms. The Chinese coined the term yinhang (銀行), meaning “silver institution”, for the English word “bank”. The first foreign bank in China was the Bombay-based British Oriental Bank Corporation (東藩匯理銀行), which opened branches in Hong Kong, Guangzhou and Shanghai in the 1840s. Other British banks followed suit and set up their branches in China one after another. The British enjoyed a virtual monopoly on modern banking for forty years. The Hong Kong and Shanghai Banking Corporation (香港上海匯豐銀行), now HSBC, established in 1865 in Hong Kong, later became the largest foreign bank in China.

At the time due to unfair treaties, foreign banks enjoyed extraterritorial rights. They also enjoyed complete control over China’s international remittance and foreign trade financing. Being unregulated by the Chinese government, they were free to issue banknotes for circulation, accept deposits from Chinese citizens, and make loans to the qianzhuang. 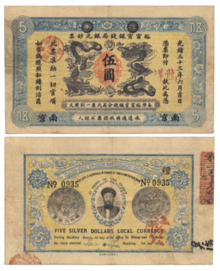 A banknote of 5 Dragon dollars issued in 1907 by the Kiangnan Yu-Ning Government Bank for circulation in the Jiangnan region.

After the launch of the Self-strengthening movement, the Qing government began initiating large industrial projects which required large amounts of capital. Though the existing domestic financial institutions provided sufficient credit and transfer facilities to support domestic trade and worked well with small-scale enterprises, they could not meet China’s new financial demands. China turned to foreign banks for large scale and long term finance. Following a series of military defeats, the Qing government was forced to borrow from foreign banks and syndicates to finance its indemnity payments to foreign powers.

A number of proposals were made by a modern Chinese banking institution from the 1860s onwards. Li Hongzhang, one of the leaders of the self-strengthening movement, made serious efforts to create a foreign-Chinese joint bank in 1885 and again in 1887.

The Imperial Bank of China (中國通商銀行), China’s first modern bank, opened for business in 1897. The bank was organised as a joint-stock firm. It adopted the internal regulations of HSBC, and its senior managers were foreign professionals. After the proclamation of the Republic of China, the bank changed its English name to the Commercial Bank of China in 1912. The name more accurately translated its Chinese name and removed any link to the Qing Dynasty.

In 1905, China’s first central bank was established as the Bank of the Board of Revenue (大清户部銀行). Three years later, its name was changed to the Great Qing Government Bank (大清銀行). Intended as a replacement for all existing banknotes, the Da Qing Bank’s note was granted exclusive privilege to be used in all public and private fund transfers, including tax payments and debt settlements. Da Qing Bank was also given exclusive privilege to run the state treasury. The Board of Revenue that controlled most of the central government’s revenue transferred most of its tax remittance through the bank and its branches. The government entrusted the bank with the transfer of the Salt Surplus Tax, diplomatic expenditures, the management of foreign loans, the payment of foreign indemnities, and the deposit and transfer of the customs tax in many treaty ports.

Following the Xinhai Revolution of 1911, Daqing Bank was renamed the Bank of China. This bank continues to exist today.

Another government bank, the Bank of Communications (交通銀行), was organised in 1908 by the Ministry of Posts and Communications to raise money for the redemption of the Beijing-Hankou Railway from Belgian contractors. The bank’s aim was to unify funding for steamship lines, railways, as well as telegraph and postal facilities.

The first private bank dates to 1897, courtesy of the entrepreneurship of Shen Xuanhui. Three private banks appeared in the late Qing period, all created by private entrepreneurs without state funding. The Xincheng Bank was established in Shanghai in 1906, followed by the National Commercial Bank in Hangzhou the following year, and the Ningbo Commercial and Savings Bank (四明銀行) in 1908. In that year, the Regulations of Banking Registration was issued by the Ministry of Revenue, which continued to have effect well after the fall of the Qing dynasty.

A lion’s share of the profitable official remittance business was taken by the Daqing Bank from the piaohao. The piaohao all but disappeared following the Xinhai Revolution in 1911.

The same period saw the increasing power of private interests in modern Chinese banking and the concentration of banking capital. In Shanghai, the so-called “southern three banks” (南三行) were established. They were the Shanghai Commercial and Savings Bank (上海商業儲蓄銀行), the National Commercial Bank (浙江興業銀行), and the Zhejiang Industrial Bank (浙江實業銀行). Four other banks, known as the “northern four banks” (北四行) emerged later. They were the Yien Yieh Commercial Bank (鹽業銀行), the Kincheng Banking Corporation (金城銀行), the Continental Bank (大陸銀行), and the China & South Sea Bank (中南銀行). The first three were initiated by current and retired officials of the Beijing government, whilst the last was created by an overseas Chinese.

Destruction Of Chinese Books In The Peking Siege Of 1900