Yang Guang was born in 569, during the reign of Emperor Wu of Northern Zhou. His parents were Yang Jian the Duke of Sui and Duchess Dugu Qieluo. He was their second son, after Yang Yong, and he had at least one older sister, Yang Lihua, who became the wife of Emperor Wu’s crown prince Yuwen Yun.

In 581, Emperor Wen made Yang Guang the commandant at Bingzhou, in charge of the provinces north of the Yellow River. Later in 582, Emperor Wen took a daughter of his vassal Emperor Ming of Western Liang to be his wife and princess. It was said that Yang Guang loved and respected her.

By 600, Yang Guang’s older brother Yang Yong had lost the favors of Emperor Wen and Empress Dugu—over his wastefulness and his having many concubines. Yang Guang, by contrast, pretended to be frugal and loving only Princess Xiao.

Emperor Wen deposed Yang Yong and replaced him with Yang Guang, putting Yang Yong under house arrest under Yang Guang’s watch. It is widely believed that Yang Guang also continued to scheme to secure his status as the crown prince.

In 602, Empress Dugu died. It was said that Yang Guang pretended to mourn greatly, refusing most foods, but in private continued to dine normally.

In 604, while Emperor Wen was at his vacation palace Renshou Palace, he fell ill and then died—a death, however, that traditional historians, while admitting a lack of direct evidence, believed to be a murder ordered by Yang Guang. Yang Guang, after sending Yang Yue to kill Yang Yong, announced Emperor Wen’s death and took the throne as Emperor Yang.

Starting in 605, Emperor Yang also started a massive number of construction projects—including the building of the imperial palace at Luoyang, described to be particularly luxurious. Further, he conscripted a large number of men to build the Tongji Canal (通濟渠), connecting Luoyang with the Yellow River and connecting the Yellow River with the Huai River, as well as to rebuild the Han Canal (邗溝), connecting the Huai River and the Yangtze River. The two canals, which would eventually become parts of the Grand Canal of China, were said to be constructed within five months, but at substantial cost of life—40% to 50% of the men employed. Emperor Yang also ordered that some 40 secondary palaces be built around the empire, so that he could visit the various provinces, arguing that he needed to do so to see the conditions of the empire so that he could govern effectively.

In 606, Emperor Yang ordered that two massive food storages—the Luokou Storage and the Huiluo Storage – be constructed near Luoyang.

In summer 607, Emperor Yang abolished provinces and changed them to commanderies. abolished the eunuch bureau and replaced it with the palace bureau. He abolished three levels of noble titles—the counts, the viscounts, and the barons—keeping only the princes, the dukes, and the marquesses.

In spring 608, Emperor Yang conscripted over a million men to construct the Yongji Canal, from the Yellow River to Zhuo Commandery (涿郡, roughly modern Beijing). It was said that there were not enough men, and he started conscripting women as well.

In spring 609, Emperor Yang ordered a redistribution of the farming land throughout the empire.

From 611-615, Emperor Yang were engaged in a series of military attacks to counter rebellions in the north and south of the Yangtze River.

Emperor Yang only appeared to begin to be concerned about rebels when, at the lunar new year imperial gathering in 616, 20 odd commanderies’ messengers did not arrive—either because they had fallen into rebel hands, or because their messengers were intercepted or killed on the way. 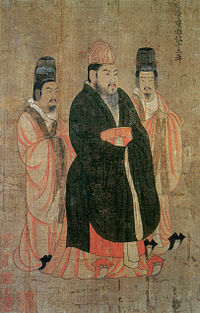 By 617, rebels in several other major areas had also emerged, which worried Emperor Yang a lot.

Meanwhile, it was said that Emperor Yang’s lifestyle grew increasingly decadent. His palace contained over 100 chambers, each exceedingly luxurious and full of beautiful women. The women of each chamber would serve as hostesses for a feast each day, and Emperor Yang, Empress Xiao, and Emperor Yang’s favored concubines would be their guests. Emperor Yang began to come to the realization that his fall was near, but still commented as if he did not care.

In the end, although there were more rebels across the country, Emperor Yang did not wish to hear about the bad news and thus fewer and fewer people reported the facts to the central court.

In late spring 618, the rebels headed by the Yuwen family launched the coup. They entered the palace and surrounded Emperor Yang, accusing him of crimes. Emperor Yang admitted his faults, but pointed out that he had always treated his people well. He took off his scarf and the rebels killed him with that.