The four categories of the people (四民) was an occupation classification used in ancient China and is considered a central part of the feudal social structure. These were the shi (gentry scholars), the nong (peasant farmers), the gong (artisans and craftsmen), and the shang (merchants and traders).

According to historian Ban Gu (AD 32–92) of Eastern Han Dynasty, the social hierarchy of each group is in descending order as follows:

“Scholars, farmers, artisans, and merchants; each of the four peoples had their respective profession. Those who studied in order to occupy positions of rank were called the shi (scholars). Those who cultivated the soil and propagated grains were called nong (farmers). Those who manifested skill (qiao) and made utensils were called gong(artisans). Those who transported valuable articles and sold commodities were called shang (merchants).”

The Rites of Zhou described the four groups in a different order, with merchants before farmers.

During the ancient Shang (1600 B.C. to 1046 B.C.) and Early Zhou dynasties (1046 B.C. to 771 B.C.), the shi were regarded as a knightly social order of low-level aristocratic lineage compared to dukes and marquises. This social class was distinguished by their right to ride in chariots and command battles from mobile chariots, while they also served civil functions.

The shi had a strict code of chivalry. In the battle of Zheqiu, 420 B.C., the shi Hua Bao shot at and missed another shi Gongzi Cheng, and just as he was about to shoot again, Gongzi Cheng said that it was unchivalrous to shoot twice without allowing him to return a shot. Hua Bao lowered his bow and was subsequently shot dead. In 624 B.C. a disgraced shi from the State of Jin led a suicidal charge of chariots to redeem his reputation, turning the tide of the battle.

After the Warring States Period, the shi became renowned not for their warrior’s skills, but for their scholarship, abilities in administration, and sound ethics and morality supported by competing philosophical schools.

Under Duke Xiao of Qin and the chief minister and reformer Shang Yang (d. 338 BC), the ancient State of Qin was transformed by a new meritocratic yet harsh philosophy of Legalism. This philosophy stressed stern punishments for those who disobeyed the publicly known laws while rewarding those who labored for the state and strove diligently to obey the laws. It was a means to diminish the power of the nobility, and was another force behind the transformation of the shi class from warrior-aristocrats into merit-driven officials.

During the Han dynasty (202 BC–AD 220), Emperor Wen introduced the first method of recruitment to civil service through examinations, while Emperor Wu (r. 141–87 BC), cemented the ideology of Confucius into mainstream governance installed a system of recommendation and nomination in government service known as xiaolian(孝廉), and a national academy. 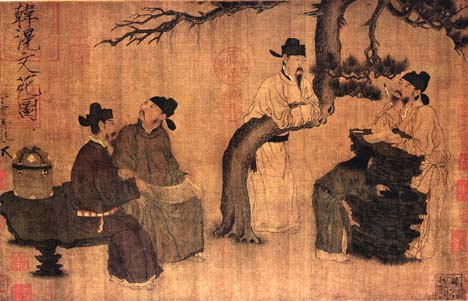 In the Sui dynasty (581–618) and the subsequent Tang dynasty (618–907) the shi class would begin to present itself by means of the fully standardized civil service examination system, of partial recruitment of those who passed standard exams and earned an official degree.

Beyond serving in the administration and the judiciary, scholar-officials also provided government-funded social services, such as prefectural or county schools, free-of-charge public hospitals, retirement homes and paupers’ graveyards。

From the 11th to 13th centuries, the number of exam candidates participating in taking the exams increased dramatically. while the number of official posts remained constant, the graduates who were not appointed to government would provide critical services in local communities, such as funding public works, running private schools, aiding in tax collection, maintaining order, or writing local gazetteers.

The Great Wall of China in history

Partition of Jin into three states