Dong Chang (东厂), translated as Eastern Depot, was a Ming dynasty spy and secret police agency run by eunuchs. It was created by the Yongle Emperor.

After the Yongle Emperor usurped the throne in 1402 from his nephew, the Jianwen Emperor, he attempted to retain the officials who served in Jianwen’s court, but some of them opposed him. In 1420, in order to suppress political opposition, Yongle decided to create the Eastern Depot (named as such because it was located east of the imperial palace), a spy and secret police agency run by eunuchs. They were responsible for spying on officials of any rank, including military officers, scholars, rebels and the general populace. The Eastern Depot would investigate and arrest suspects, and then hand them over to the Jinyiwei for interrogation. In the late Ming dynasty, the Eastern Depot had its own tactical forces and prisons, and became so powerful that even officials were ordered to kowtow to the Depot’s leaders.

The Embroidered Uniform Guard (锦衣卫, literally: “brocade-clad guard”) was the imperial secret police that served the emperors of the Ming dynasty in China. The guard was founded by the Hongwu Emperor in 1368 to serve as his personal bodyguards. In 1369 it became an imperial military body. They were given the authority to overrule judicial proceedings in prosecutions with full autonomy in arresting, interrogating and punishing anyone, including nobles and the emperor’s relatives.

The Embroidered Uniform Guard was tasked with collecting military intelligence on the enemy and participation in battles during planning. The guards donned a distinctive golden-yellow uniform, with a tablet worn on his torso, and carried a special blade weapon. 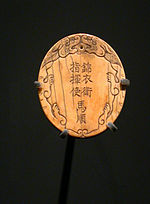 The Jinyiwei originated as early as 1360. They served as Zhu Yuanzhang’s personal bodyguards and defended him during a battle with the warlord Chen Youliang. After Zhu founded the Ming dynasty and became the Hongwu Emperor, he doubted his subjects’ loyalties towards him and was constantly on guard against possible rebellions and assassinations. One of the early duties of the Jinyiwei was to help the emperor spy on his subjects. The Hongwu Emperor increased the Jinyiwei’s duties later, allowing them to inspect his officials at work in the capital city, before formally establishing the organisation in 1382, with about 500 members. Their numbers increased to around 14,000 in three years.

In 1393, the Hongwu Emperor reduced the Jinyiwei’s duties after they allegedly abused their authority during the investigation of a rebellion plot by Lan Yu, in which about 40,000 people were implicated and executed. When the Yongle Emperor ascended to the throne, he was afraid that his subjects might be discontented with him, because he came to power by usurping his nephew’s throne. He reinstated the Jinyiwei’s authority to increase his control over the imperial court. The Jinyiwei was disbanded after 262 years of existence when Li Zicheng’s rebel forces overthrew the Ming dynasty in 1644.

The Jinyiwei were authorised to overrule judicial proceedings in prosecuting those deemed as enemies of the state, granted with full autonomy in arresting, interrogating, detaining them without trial and punishing them, without going through due process. They were bound to the service of the emperor and took direct orders from him. They also served as political commissars for the Ming armies in times of war. In the later years of the Ming dynasty, the Jinyiwei were placed under the control of the Eastern Depot/Dong Chang faction. As the government sank into corruption, the Jinyiwei was constantly used as a means of eliminating political opponents through assassinations and legal prosecutions.

The Great Wall of China in history

Religious worships of the Shang Dynasty