Note: The Chinese government’s attempted characterization of Goguryeo as a possible regional Chinese power in recent times has received heated criticisms and complaints from both North Korea and South Korea, as well as all scholars of Goguryeo history, including Chinese scholars.

Online discussion regarding this topic has increased. The Internet has provided a platform for a broadening participation in the discussion of Goguryeo in both South Korea and China. Thomas Chase points out that despite the growing online discussion on this subject, this has not led to a more objective treatment of this history, nor a more critical evaluation of its relationship to national identity. 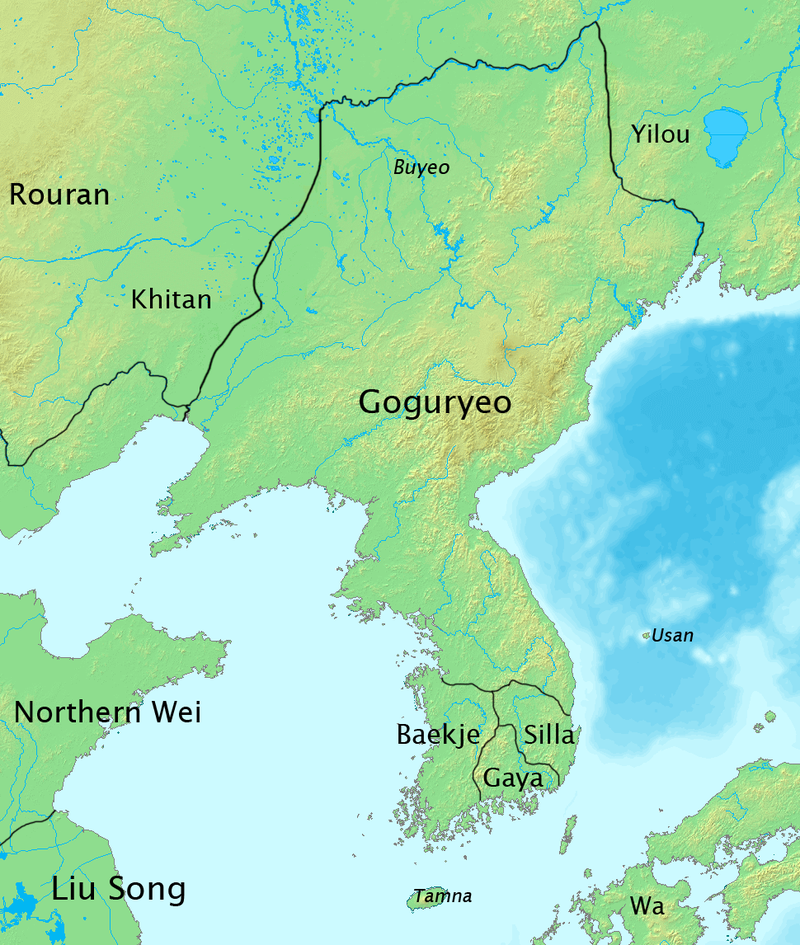 In the geographic monographs of the Book of Han, the word Goguryeo (高句驪 ) was first mentioned in 113 BCE as a region under the jurisdiction of the Xuantu Commandery, page 33. In the Old Book of Tang (945), it is recorded that Emperor Taizong refers to Goguryeo’s history as being some 900 years old. According to the 12th-century Samguk Sagi and the 13th-century Samgungnyusa, a prince from the Buyeo kingdom named Jumong fled after a power struggle with other princes of the court and founded Goguryeo in 37 BCE in a region called Jolbon Buyeo, usually thought to be located in the middle Yalu and Tongjia River basin, overlapping the current China-North Korea border.

In 75 BCE, a group of Yemaek who may have originated from Goguryeo made an incursion into China’s Xuantu Commandery west of the Yalu.

The Samguk Sagi, a 12th-century text from Goryeo, indicates that Goguryeo was founded in 37 BCE by Jumong (Hangul: 주몽; Hanja: 朱蒙), a prince from Buyeo, who was enthroned as Dongmyeong. There is archaeological and textual evidence from Chinese geographic monographs that suggests that Goguryeo may have been in existence since the second century BCE around the fall of Gojoseon, an earlier kingdom which also occupied southern Manchuria and the northern Korean Peninsula.

Goguryeo developed from a league of various Yemaek tribes to an early state and rapidly expanded its power from their original basin of control in the Hun River drainage. In the time of Taejodae in 53 CE, five local tribes were reorganized into five centrally ruled districts. Foreign relations and the military were controlled by the king. Early expansion might be best explained by ecology; Goguryeo controlled territory in what is currently central and southern Manchuria and northern Korea which are both very mountainous and lacking in arable land.

Goguryeo was a highly militaristic state.

In the chaos following the fall of the Han Dynasty, the former Han commanderies had broken free of control and were ruled by various independent warlords. Surrounded by these commanderies, who were governed by aggressive warlords, Goguryeo moved to improve relations with the newly created dynasty of Cao Wei in China and sent tribute in 220. In 238, Goguryeo entered into a formal alliance with Wei to destroy the Liaodong commandery.

When Liaodong was finally conquered by Wei, cooperation between Wei and Goguryeo fell apart and Goguryeo attacked the western edges of Liaodong, which incited a Wei counterattack in 244. Thus, Goguryeo initiated the Goguryeo–Wei Wars in 242, trying to cut off Chinese access to its territories in Korea by attempting to take a Chinese fort. However, the Wei state responded by invading and defeated Goguryeo.

In the late 6th and early 7th centuries, Goguryeo was often in military conflict with the Sui and Tang dynasties of China. Its relations with Baekje and Silla were complex and alternated between alliances and enmity. A neighbor in the northwest were the Eastern Göktürk which was a nominal ally of Goguryeo.

Goguryeo’s expansion conflicted with Sui China and increased tensions. In 598, Goguryeo made a preemptive attack on Liaoxi, leading Emperor Wen to launch a counterattack by land and sea that ended in disaster for Sui. Emperor Yang’s disastrous defeats in Korea greatly contributed to the collapse of the Sui dynasty.

In 645, Emperor Taizong, who had a personal ambition to defeat Goguryeo and was determined to succeed where Emperor Yang had failed, personally led an attack on Goguryeo. The campaign was unsuccessful for the Tang Chinese, failing to capture Ansi Fortress after a protracted siege that lasted more than 60 days. Emperor Taizong invaded Goguryeo again in 647 and 648, but was defeated both times.

During Emperor Gaozong’s time, Goguryeo was thrown into chaos and weakened by a succession struggle. Emperor Gaozong saw this as an opportunity and sent an army to attack and destroy Goguryeo.

This was the end of Goguryeo, and Tang annexed Goguryeo into its territory, with Xue Rengui being put initially in charge of former Goguryeo territory as protector general.

A revival movement started for nearly a century and the country was not stablized until in 918 Wang Geon overthrew Gung Ye and established Goryeo.

Mausoleum of the First Qin Emperor and the Terracotta Army