The Tang dynasty has been described as a golden age for women, in contrast to the Neo-Confucianism of the Song dynasty that saw practices like foot-binding, widow suicide, and widow chastity become socially normative. This image of women’s freedom comes from the fact that the Tang Empire was governed by several powerful women for half a century. Wu Zetian rose from the position of Emperor Gaozong’s concubine to govern the country in various roles, first as his empress consort, later as regent for his heir, before declaring herself emperor of a new Zhou dynasty in 690. Other major female players in politics at this time included Empress Wei and Princess Taiping.

Concepts of women’s social rights and social status during the Tang era were notably liberal-minded for the period. However, this was largely reserved for urban women of elite status, as men and women in the rural countryside labored hard in their different set of tasks; with wives and daughters responsible for more domestic tasks of weaving textiles and rearing of silk worms, while men tended to farming in the fields. There were many women in the Tang era who gained access to religious authority by taking vows as Daoist priestesses. The head mistresses of the bordellos in the North Hamlet of the capital Chang’an acquired large amounts of wealth and power. Their high-class courtesans, who likely influenced the Japanese geishas, were well respected. These courtesans were known as great singers and poets, supervised banquets and feasts, knew the rules to all the drinking games, and were trained to have the utmost respectable table manners. 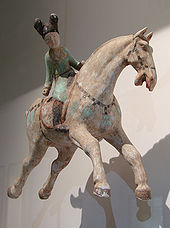 Although they were renowned for their polite behavior, the courtesans were known to dominate the conversation amongst elite men, and were not afraid to openly castigate or criticize prominent male guests who talked too much or too loudly, boasted too much of their accomplishments, or had in some way ruined dinner for everyone by rude behavior (on one occasion a courtesan even beat up a drunken man who had insulted her). When singing to entertain guests, courtesans not only composed the lyrics to their own songs, but they popularized a new form of lyrical verse by singing lines written by various renowned and famous men in Chinese history.

It was fashionable for women to be full-figured (or plump). Men enjoyed the presence of assertive, active women. The foreign horse-riding sport of polo from Persia became a wildly popular trend amongst the Chinese elite, and women often played the sport (as glazed earthenware figurines from the time period portray). The preferred hairstyle for women was to bunch their hair up like “an elaborate edifice above the forehead”, while affluent ladies wore extravagant head ornaments, combs, pearl necklaces, face powders, and perfumes. A law was passed in 671 which attempted to force women to wear hats with veils again in order to promote decency, but these laws were ignored as some women started wearing caps and even no hats at all, as well as men’s riding clothes and boots, and tight-sleeved bodices.

There were some prominent court women after the era of Empress Wu, such as Yang Guifei (719–756), who had Emperor Xuanzong appoint many of her relatives and cronies to important ministerial and martial positions.

Tang society followed the traditions of Northern China, which was closely related to that of the nomadic peoples of Central Asia and the Eurasian Steppe. In these societies, women and men were more equal than had been permitted during the Han dynasty, with women recorded as handling legal disputes, involved in politics, and warfare. Princess Pingyang, a daughter of the first emperor of the Tang, was instrumental in founding the Tang dynasty, raising and commanding an army of 70,000 soldiers to assist her father’s campaign. In addition, women continued to occupy powerful positions in the social consciousness, appearing in tales as powerful spirits responsible for a household’s fate, as well as shamans, despite the fact that a secular class of physicians existed during the Tang.

The frequency of marrying female relatives to foreign rulers to forge political alliances increased during the Tang. In contrast to earlier dynasties, the princesses sent by the Tang court were usually genuine members of the imperial house. Far from being passive objects traded between states, the princesses were expected to act as Tang ambassadors and diplomats to the courts they married into. This could be as cultural ambassadors, as in the case of Princess Wencheng, who is credited with introducing Buddhism to Tibet along with her co-wife Bhrikuti of Licchavi. An example of a princess acting as a political diplomat is seen in the marriage of Princess Taihe to the head of the Uyghur Khaganate. After being widowed in 824, Princess Taihe was kidnapped twice during conflict with the Yenisei Kirghiz and made to petition Emperor Wuzong of Tang to formally acknowledge the rebel leader. The message sent by Emperor Wuzong of Tang to Princess Taihe, recorded in the Zizhi Tongjian, reveals the political expectations placed on these female diplomats.

Originally, the empire lost its beloved daughter for a marriage that would make peace and cause the Uyghur Khaganate to assist in stabilising and defending its borders. Recently, the actions of the khaganate have been thoroughly unreasonable and its horses have come south. Do you, Aunt, not fear the anger of Emperor Gaozu and Emperor Taizong’s spirits! When the empire’s borders are disturbed, do you not think of the love of the Grand Empress Dowager! You are the mother of the khaganate and should be powerful enough to issue orders. If the khaganate does not follow your orders, this will end the relationship between our two states and they will no longer be able to hide behind you!

The Tang saw an increasing perception of women as a commodity. Although previously only the upper classes had concubines  妾 in addition to one wife, Tang legal codes set out the formal differences between wives and concubines, as well as the children born by each. A man was legally only allowed one wife, but could, “purchase as many concubines as he could afford.” The legal status of a concubine was very far from that of a maid 婢, with maids needing to be freed (放) to change their position. However, a concubine was expected to serve the wife in the same way as a maid, her sons were required to treat the wife as their legal mother, and, on her husband’s death, she had no claims to the property he left. Though wives were not supposed to be sold, the perception of women as marketable goods made it simple for husbands to sell their wives to brothel madams, such as those found in eastern Chang’an. The courtesans of Chang’an were employed to sing, converse with, and entertain customers, similar to the Japanese geisha. The girls had often been beggars or indentured to poor families. On entering the brothel, the girls took the madam’s surname. A way out was to either marry a client or become a concubine. Venereal diseases were recognised during the Tang and physicians document one similar to gonorrhea that was spread through sex.

The level of education required of courtesans, coupled with their frequently literati clientele, meant that many wrote poetry commenting on current society and events. Li Ye was so famed for her literary talents that she was summoned to the court of Emperor Dezong of Tang to compose poetry for him. Dezong was known for his appreciation of female scholars and talent, as he had previously summoned the five Song sisters and been so impressed with their knowledge of the Classics and poetry that he employed them as court poets. Several other poets of the time, like Li Ye, bridged various social divides, being at different times courtesans and Taoist nuns. Examples of such women include Xue Tao and Yu Xuanji. Not all female poets during the Tang were courtesans, however, and women writers were common enough that the scholar Cai Xingfeng (蔡省風) edited a collection of poetry written exclusively by women, known as the Collection of New Songs from the Jade Lake (瑤池新詠集).

Examples of occupations pursued by women included trade (selling foodstuffs), weaving, tending silk worms, singing, dancing, acrobatics, street performance, storytelling, and secretary to officials. Joining a religious institution was also a career choice taken by many women. Chang’an alone reportedly had 27 Buddhist nunneries and six Taoist temples with priestesses in the early 8th century. The nuns participated in religious processions, such as the arrival of a Buddhist relic to Chang’an, when nuns and monks walked behind the vehicle conveying the Buddha’s finger bone.

The Tang taxation system calculated the amount owed by every adult male to the state; women were not taxed. However, part of a male’s tax included 20 feet of silk or 25 feet of linen woven by the women of his household. In short, the government presumed that a women would be represented in official bureaucracy by a male guardian. Charles Benn notes that Tang women adopted a cloak that covered their bodies from head to foot, with only a small gap for their eyes, from the Tuyuhun. The intention was to avoid men’s gazes when out and about. The fashion began to fade in the 8th century, which Emperor Gaozong of Tang found distressing, as women’s faces were exposed when venturing outside. Gaozong issued two edicts attempting to revive the style, but the headwear was soon replaced by a wide-brimmed hat with a veil of gauze hanging from the brim to the shoulders.