The Kangxi Emperor is considered one of China’s greatest emperors. He suppressed the Revolt of the Three Feudatories, forced the Kingdom of Tungning in Taiwan and assorted Mongol rebels in the North and Northwest to submit to Qing rule, and blocked Tsarist Russia on the Amur River, retaining Outer Manchuria and Outer Northwest China.

The Kangxi Emperor’s reign brought about long-term stability and relative wealth after years of war and chaos. 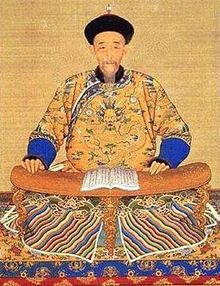 The Kangxi Emperor was the great consolidator of the Qing dynasty. The transition from the Ming dynasty to the Qing was a cataclysm whose central event was the fall of the capital Beijing to the peasant rebels led by Li Zicheng, then to the Manchus in 1644, and the installation of the five-year-old Shunzhi Emperor on their throne. By 1661, when the Shunzhi Emperor died and was succeeded by the Kangxi Emperor, the Qing conquest of China proper was almost complete. Leading Manchus were already using Chinese institutions and mastering Confucian ideology, while maintaining Manchu culture among themselves. The Kangxi Emperor completed the conquest, suppressed all significant military threats and revived the central government system inherited from the Ming with important modifications.

The Kangxi Emperor was a workaholic, rising early and retiring late, reading and responding to numerous memorials every day, conferring with his councilors and giving audiences – and this was in normal times; in wartime, he might be reading memorials from the warfront until after midnight or even, as with the Dzungar conflict, away on campaign in person.

The Kangxi Emperor devised a system of communication that circumvented the scholar-bureaucrats, who had a tendency to usurp the power of the emperor. This Palace Memorial System involved the transfer of secret messages between him and trusted officials in the provinces, where the messages were contained in locked boxes that only he and the official had access to. This started as a system for receiving uncensored extreme-weather reports, which the emperor regarded as divine comments on his rule. However, it soon evolved into a general-purpose secret “news channel.” Out of this emerged a Grand Council, which dealt with extraordinary, especially military, events. The council was chaired by the emperor and manned by his more elevated Han Chinese and Manchu household staff. From this council, the mandarin civil servants were excluded – they were left only with routine administration.

The Kangxi Emperor managed to woo the Confucian intelligentsia into co-operating with the Qing government, despite their deep reservations about Manchu rule and loyalty to the Ming. He appealed to this very sense of Confucian values, for instance, by issuing the Sacred Edict in 1670. He encouraged Confucian learning and made sure that the civil service examinations were held every three years even during times of stress. When some scholars, out of loyalty to the Ming, refused to take the exams, he hit upon the expedient of a special exam to be taken by nomination. He personally sponsored the writing of the Ming Official History, the Kangxi Dictionary, a phrase-dictionary, a vast encyclopedia and an even vaster compilation of Chinese literature. To promote his image as a “sage ruler,” he appointed Manchu and Chinese tutors with whom he studied the Confucian classics and worked intensively on Chinese calligraphy.

In the one military campaign in which he actively participated, against the Dzungar Mongols, the Kangxi Emperor showed himself an effective military commander. According to Finer, the emperor’s own written reflections allow one to experience “how intimate and caring was his communion with the rank-and-file, how discriminating and yet masterful his relationship with his generals”.

As a result of the scaling down of hostilities as peace returned to China after the Manchu conquest, and also as a result of the ensuing rapid increase of population, land cultivation and therefore tax revenues based on agriculture, the Kangxi Emperor was able first to make tax remissions, then in 1712 to freeze the land tax and corvée altogether, without embarrassing the state treasury (although the dynasty eventually suffered from this fiscal policy).

During his reign, the Kangxi Emperor ordered the compilation of a dictionary of Chinese characters, which became known as the Kangxi Dictionary. This was seen as an attempt by the emperor to gain support from the Han Chinesescholar-bureaucrats, as many of them initially refused to serve him and remained loyal to the Ming dynasty. However, by persuading the scholars to work on the dictionary without asking them to formally serve the Qing imperial court, the Kangxi Emperor led them to gradually taking on greater responsibilities until they were assuming the duties of state officials.

In 1705, on the Kangxi Emperor’s order, a compilation of Tang poetry, the Quantangshi, was produced.

The Kangxi Emperor also was interested in Western technology and wanted to import them to China. This was done through Jesuit missionaries, such as Ferdinand Verbiest, whom the Kangxi Emperor frequently summoned for meetings, or Karel Slavíček, who made the first precise map of Beijing on the emperor’s order.

From 1711 to 1723, Matteo Ripa, an Italian priest sent to China by the Congregation for the Evangelization of Peoples, worked as a painter and copper-engraver at the Qing court. In 1723, he returned to Naples from China with four young Chinese Christians, in order to groom them to become priests and send them back to China as missionaries. This marked the beginning of the Collegio dei Cinesi, sanctioned by Pope Clement XII to help the propagation of Christianity in China. This Chinese Institute was the first school of Sinology in Europe, which would later develop to become the Istituto Orientale and the present day Naples Eastern University.

The Kangxi Emperor was also the first Chinese emperor to play a western musical instrument. He employed Karel Slavíček as court musician. Slavíček was playing Spinet; later the emperor would play on it himself. He also invented a Chinese calendar. China’s famed blue and white porcelain probably reached its zenith during the Kangxi Emperor’s reign. 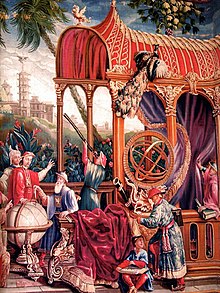 In the early decades of the Kangxi Emperor’s reign, Jesuits played a large role in the imperial court. With their knowledge of astronomy, they ran the imperial observatory.

The Kangxi Emperor was also fond of the Jesuits’ respectful and unobtrusive manner; they spoke the Chinese language well, and wore the silk robes of the elite. In 1692, when Fr. Thomas Pereira requested tolerance for Christianity, the Kangxi Emperor was willing to oblige, and issued the Edict of Toleration, which recognized Catholicism, barred attacks on their churches, and legalized their missions and the practice of Christianity by the Chinese people.

The Kangxi Emperor had an estimated 64 spouses in total. He had officially 24 sons and 12 daughters. The actual number is higher, as most of his children died from illness.