The An Lushan Rebellion was a devastating rebellion against the Tang dynasty of China. The rebellion overtly began on 16 December 755, when general An Lushan declared himself emperor in Northern China, thus establishing a rival Yan Dynasty, and ended when Yan fell on 17 February 763.

Background picture:  in the manner of Li Zhaodao, from the 11th century, the picture shows Emperor Xuanzong of Tang fleeing to Sichuan province from Chang’an to escape the violence. Later artists produced numerous versions of this painting, including one by Qiu Ying in the Ming Dynasty.

The rebellion and subsequent disorder resulted in a huge loss of life and large-scale destruction. It significantly weakened the Tang dynasty, and led to the loss of the Western Regions.

With rebel forces clearly an imminent threat to the imperial seat of Chang’an, and with conflicting advice from his advisers, Tang emperor Xuanzong determined to flee to the relative sanctuary of Sichuan with its natural protection of mountain ranges so the Tang forces could reorganize and regroup. He brought along the bulk of his court and household. The route of travel from Chang’an to Sichuan was notoriously difficult, requiring hard travel on the way through the intervening Qin Mountains.

There is no doubt that the rebellion resulted in a huge number of deaths and that the Tang empire’s population was greatly reduced.

Censuses taken in the half-century before the rebellion show a gradual increase in population, with the last census undertaken before the rebellion, in 755, recording a population of 52,919,309 in 8,914,709 taxpaying households. However, a census taken in 764, the year following the end of the rebellion, recorded only 16,900,000 in 2,900,000 households. (Although historians such as Charles Patrick Fitzgerald argue that a claim of 36 million deaths is incompatible with contemporary accounts of the war.)

The rebellion of An Lushan and its aftermath greatly weakened the centralized bureaucracy of the Tang dynasty, especially in regards to its perimeters. Virtually autonomous provinces and ad hoc financial organizations arose, reducing the influence of the regular bureaucracy in Chang’an.

The political decline was paralleled by economic decline, including large Tang governmental debt to Uighur money lenders. In addition to being politically and economically detrimental to the empire, the rebellion also affected the intellectual culture of the Tang dynasty. Many intellectuals had their careers interrupted, giving them time to ponder the causes of the unrest. Some lost faith in themselves, concluding that a lack of moral seriousness in intellectual culture had been the cause of the rebellion.

The great poet Li Bai avoided the rebels, but at the cost of getting involved on the wrong side of a power struggle between the princes of the royal family. He was convicted of involvement with rebellion and sentenced to exile, although he was later reprieved. His surviving poems reflect the golden days before the An Lushan rebellion, his lengthy and deliberately protracted journey toward exile, together with his hardships, wandering and disillusionment as the Tang re-consolidated control after the rebellion. He died in 762, before the final defeat of the rebel forces a year later. 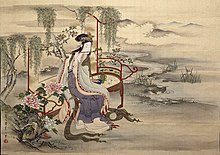 Bai Juyi (772-846) also wrote famous verses about the events of the period of the Anshi affairs. The tragic events were epitomized in the story of Xuanzong and Yang Guifei, and generations of Chinese and Japanese painters depicted various iconic scenes, such as Yang Guifei bathing or playing a musical instrument or the flight of the imperial court on the “hard road to Shu(Sichuan province)”.

An Lushan was killed by his son, An Qingxu, in late January 757.

The end of the rebellion was only part of a long process of rebuilding and recovery for the Tang. In part due to the weakened condition of the Tang, other disturbances continued to evolve.

Edited and rewrittedn from Wikipedia

Archaeological discoveries of the Xia Dynasty