The authorities in British India renewed their interest in Tibet in the late 19th century, and a number of Indians entered the region, first as explorers and then as traders. Treaties regarding Tibet were concluded between Britain and China in 1886, 1890, and 1893, but the Tibetan government refused to recognize their legitimacy and continued to bar British envoys from its territory. During “The Great Game“, a period of rivalry between Russia and Britain, the British desired a representative in Lhasa to monitor and offset Russian influence. 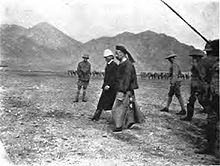 At the beginning of the 20th century the British and Russian Empires were competing for supremacy in Central Asia. Under the pretext to forestall the Russians, in 1904, a British expedition led by Colonel Francis Younghusband was sent to Lhasa to force a trading agreement and to prevent Tibetans from establishing a relationship with the Russians. In response, the Chinese foreign ministry asserted that China was sovereign over Tibet, the first clear statement of such a claim. Before the British troops arrived in Lhasa, the 13th Dalai Lama fled to Outer Mongolia, and then went to Beijing in 1908.

A treaty in 1904 known as the Treaty of Lhasa was imposed which required Tibet to open its border with British India, to allow British and Indian traders to travel freely, not to impose customs duties on trade with India, a demand from the British that Lhasa had to pay 2.5 million rupees as indemnity and not to enter into relations with any foreign power without British approval. 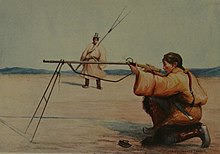 The Anglo-Tibetan treaty was followed by a Sino-British treaty in 1906 by which the “Government of Great Britain engages not to annex Tibetan territory or to interfere in the administration of Tibet. The Government of China also undertakes not to permit any other foreign State to interfere with the territory or internal administration of Tibet.” Moreover, Beijing agreed to pay London 2.5 million rupees which Lhasa was forced to agree upon in the Anglo-Tibetan treaty of 1904. In 1907, Britain and Russia agreed that in “conformity with the admitted principle of the suzerainty of China over Tibet” both nations “engage not to enter into negotiations with Tibet except through the intermediary of the Chinese Government.”