Li Si (Chinese: 李斯; c. 280 BC – September or October 208 BC) was a Chinese politician of the Qin dynasty. He served as the Chancellor (or Prime Minister) of the Qin dynasty from 246–208 BC, well known Legalist writer and politician, and notable calligrapher. He served under two rulers: Qin Shi Huang, the king of the Qin state and later the First Emperor of the Qin dynasty; and Qin Er Shi, Qin Shi Huang’s youngest son and the Second Emperor.  Concerning administrative methods, Li “indicated that he admired and utilized the ideas of Shen Pu-hai”, repeatedly referring to the technique of Shen and Han Fei, but regarding law followed Shang Yang.

Stanford University’s John Knoblock considered Li Si “one of the two or three most important figures in Chinese history”. Having a clear vision of universal empire and “one world comprising all Chinese, bringing with universal dominion universal peace”, Li Si was “largely responsible for the creation of those institutions that made the Qin dynasty the first universal state in Chinese history”. 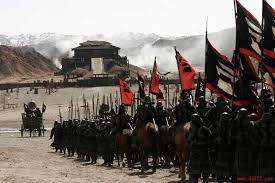 Li Si unified the laws, governmental ordinances, weights and measures, and standardized chariots, carts, and the characters used in writing… [facilitating] the cultural unification of China. He “created a government based solely on merit, so that in the empire sons and younger brothers in the imperial clan were not ennobled, but meritorious ministers were”, and “pacified the frontier regions by subduing the barbarians to the north and south”. He had the weapons of the feudal states melted and cast into musical bells and large human statues, and relaxed taxes and the draconian punishments inherited from Shang Yang.

Li Si was originally from Shang Cai (上蔡) in the State of Chu. As a young man he was a minor functionary in the local administration of Chu. According to the Records of the Great Historian, one day Li Si observed that rats in the outhouse were dirty and hungry but the rats in the barnhouse were well fed. He suddenly realized that “there is no set standard for honor since everyone’s life is different. The values of people are determined by their social status. And like rats, people’s social status often depends purely on the random life events around them. And so instead of always being restricted by moral codes, people should do what they deemed best at the moment.” He made up his mind to take up politics as a career, which was a common choice for scholars not from a noble family during the Warring States period.

Li Si was unable to advance his career in Chu. He believed that achieving nothing in life while being so intelligent and educated would bring shame to not just himself but to all scholars. After having finished his education with the famous Confucian thinker Xunzi, he moved to the State of Qin, the most powerful state at that time in an attempt to advance his political career.

During his stay in Qin, Li Si became a guest of Prime Minister Lü Buwei and got the chance to talk to the ruler of Qin, King Zheng who would later become the first emperor of a unified China, Qin Shi Huang. Li Si expressed that the Qin state was extremely powerful, but uniting China was still impossible if all of the other six states united to fight against Qin. Qin Shi Huang was impressed by Li Si’s view of how to unify China. Having adopted Li Si’s proposal, the ruler of Qin spent generously to lure intellectuals to the state of Qin and sent out assassins to kill important scholars in other states.

In 237 BC a clique at the Qin court urged King Zheng to expel all foreigners from the state to prevent espionage. As a native of Chu, Li Si would be a target of the policy so he memorialized the king explaining the many benefits of foreigners to Qin including “the sultry girls of Zhao”. The king relented and, impressed with Li Si’s rhetoric, promoted him. The same year, Li Si is reported to have urged King Zheng to annex the neighbouring State of Han to order to intimidate the other five remaining states. Li Si also wrote the “Petition against the Expulsion of Guest Officers” (Jianzhuke Shu) in 234 BC. Han Fei, a member of the aristocracy from the State of Han, was asked by the Han king to go to Qin and resolve the situation through diplomacy. Li Si, who envied Han Fei’s intellect, persuaded the Qin king that he could neither send Han Fei back (as his superior ability would be a threat to Qin) nor employ him (as his loyalty would not be to Qin). As a result, Han Fei was imprisoned, and in 233 BC convinced by Li Si to commit suicide by taking poison. The State of Han was later conquered in 230 BC.

After Qin Shi Huang became emperor Li Si persuaded him to suppress intellectual dissent. Li Si believed that books regarding things such as medicine, agriculture and prophecy could be ignored but political books were dangerous in public hands. It was hard to make progress and change the country with the opposition of so many “old school” scholars. As a result, only the state should keep political books, and only the state run schools should be allowed to educate political scholars. Li Si himself penned the edict ordering the destruction of historical records and literature in 213 BC, including key Confucian texts, which he thought detrimental to the welfare of the state. It is commonly thought that 460 Confucian scholars were buried alive, from the well-known historical event “Burning Books and Burying Confucianists” (焚书坑儒); however, this was a mistranslation in later historical texts. In reality, the 460 people who were buried alive by the emperor Qin Shi Huang were mainly priests and shamans who were alleged to be depriving the emperor of resources and wealth while looking for medicines that would grant eternal life or apotheosis.

When Qin Shi Huang died while away from the capital, Li Si and the chief eunuch Zhao Gao suppressed the late emperor’s choice of successor, which was Fusu. At that time Fusu was close friends with Meng Tian. If Fusu became the next emperor there was a high chance Meng Tian would replace Li Si as prime minister. Fearing a loss of power, Li Si decided to betray the dead Qin Shi Huang. Li Si and Zhao Gao tricked Fusu into committing suicide, and installed another prince, Qin Er Shi (229 BC – 207 BC) in his place. During the tumultuous aftermath, Zhao Gao convinced the new emperor to install his followers in official positions. When his power base was secure enough, Zhao Gao betrayed Li Si and charged him with treason. Qin Er Shi, who viewed Zhao Gao as his teacher, did not question his decision. Zhao Gao had Li Si tortured until he admitted the crime. In 208 BC Zhao Gao had Li Si executed by way of waist chop (腰斩).

Believing in a highly bureaucratic system, Li Si is considered to have been central to the efficiency of the state of Qin and the success of its military conquest. He was also instrumental in systematizing standard measures and currency in post-unified China. He further helped systematize the written Chinese language by promulgating as the imperial standard the small seal script which had already been in use in the state of Qin. In this process, variant glyphs within the Qin script were proscribed, as were variant scripts from the different regions which had been conquered. This would have a unifying effect on the Chinese culture for thousands of years. Li Si was also the author of the Cangjiepian, the first Chinese language primer of which fragments still exist.