Wei River, Chinese (Pinyin) Wei He or (Wade-Giles romanization) Wei Ho, river in Gansu and Shaanxi provinces, north-central China, a western tributary of the Huang He (Yellow River). It rises in the Niaoshu Mountains in Weiyuan county of central Gansu province and flows east, first between the north-south-trending Long Mountains and the east-west-trending Qin (Tsinling) Mountains and then along the northern base of the Qin. Entering Shaanxi province, it flows to the north of Xi’an and Huayin before joining the Huang He at Tongguan. The river’s total length is approximately 535 miles (860 km). Its basin is sharply defined to the south, through most of its course, by the abrupt clifflike northern face of the Qin Mountains. The Wei’s drainage basin is formed almost entirely by tributaries flowing from the north and is divided into three major areas: the mountainous and arid plateau region to the west of the Long and Liupan mountain ranges in Gansu; the heavily dissected Loess Plateau of Shaanxi, which is covered with the fine windblown silt called loess; and the troughlike floodplain of the river’s lower course. Its major tributaries in Shaanxi are the Jing and Luo rivers.

Historically, the Wei River valley was the earliest centre of Chinese civilization and until the 10th century ad was the site of a succession of capital cities. The area around the junction of the Jing and the Wei rivers was also the site of the first ambitious irrigation works in China—the Baigong and Chenggong canal systems, built in the 3rd century bc. The Wei and its tributaries have always carried a heavy silt load and thus have never been major waterways. To supply the capital cities in the area of Xi’an, canals were built paralleling the river as far east as Tongguan. The first of these was constructed at the beginning of the 1st century bc during the Han dynasty (206 bc–ad 220). Although this earliest canal fell into disrepair, another canal was built during the Sui dynasty (581–618). The irrigation works on which the Wei River valley depended for its prosperity have undergone many vicissitudes. After being left derelict in the late 19th century, a new canal system called the Weihui (“Favour of the Wei”) was opened in 1937. 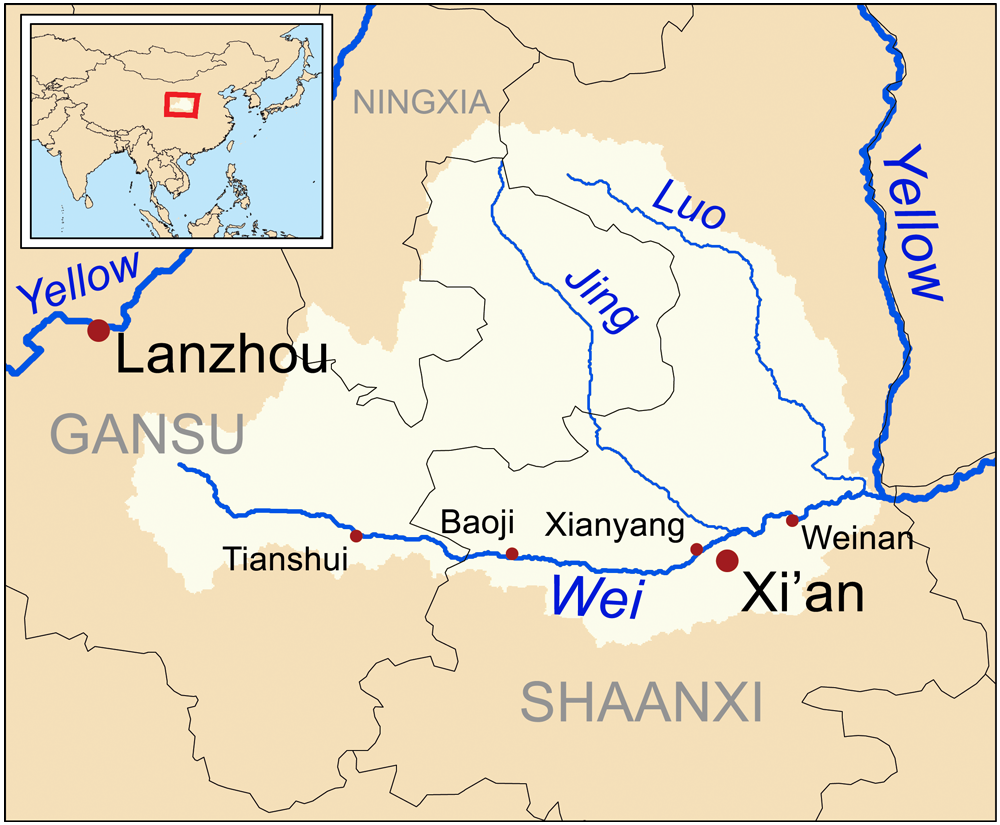 The valley of the Wei was one of the early cradles of Chinese civilization, along which the capitals of the Zhou, Qin, Han, and Tang Dynasties were situated. The area of Dingxi around its headwaters in Gansu has numerous stone age sites from various early cultures.  Some Chinese historians now believe the Wei is the ancient Jiang River that gave its name to the families of Shennong and the Yan emperor, two Chinese legendary heroes credited with the early development of agriculture there.

The headwaters of the Wei River are also notable in the development of the Northern Silk Road. The Chinese segment of the Northern Silk Road connected Xi’an (then the capital of China) to the west via Baoji, Tianshui at the Wei’s headwaters, Lanzhou, Dunhuang, and the Wushao Ling Mountain, before looping north of the Takla Makan on its way to Kashgar and the routes into Parthia.

Li Si: one of the most important figures in Chinese history