The ruins of the walls of Han’s first capital Chang’an still stand today at 12 m (39 ft) in height with a base width of 12 to 16 m (39 to 52 ft). Modern archaeological surveys have proven that the eastern wall was 6,000 m (20,000 ft) long, the southern wall was 7,600 m (24,900 ft) long, the western wall was 4,900 m (16,100 ft) long, and the northern wall was 7,200 (23,622 ft) long. Overall the total length of walls equalled 25,700 m (84,300 ft), and formed a roughly square layout (although the southern and northern walls had sections which zigzagged due to topographical concerns: rough terrain existed along the southern wall and the course of the Wei River obstructed the straight path of the northern wall). The city’s moat was 8 m (26 ft) wide and 3 m (9.8 ft) deep; the remains of what were wooden bridges have been discovered along the moat. Chang’an had twelve gatehouses leading into the city, three for each side of the wall, and acted as terminus points for the main avenues. Every gatehouse had three gateway entrances that were each 6 m (20 ft) wide; Han-era writers claimed that each gateway could accommodate the traffic of four horse-drawn carriages at once. The drainage system included many drainholes that were dug under these gates and lined with bricks that form arches, where ceramic water pipes have been found that once connected to the ditches built alongside the major streets. Only some wall sections and platform foundations of the city’s once lavish imperial palaces remain. Likewise, the stone foundations of the armory were also discovered, but its wooden architecture had long since disappeared. 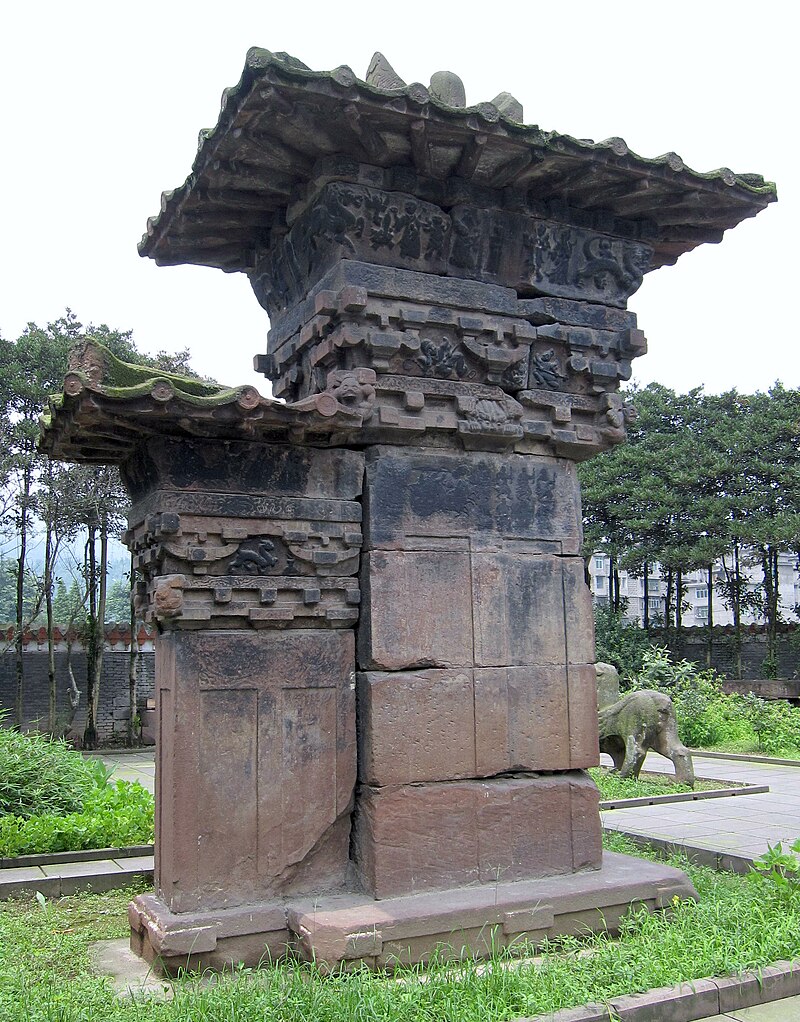 Some sections of the wall ruins of Han’s second capital Luoyang still stand at 10 m (33 ft) in height and 25 m (82 ft) in width at the base. The eastern wall was 3,900 m (12,800 ft) long, the western wall was 3,400 m (11,200 ft) long, and the northern wall was 2,700 m (8,900 ft) long, yet the southern wall was washed away when the Luo River changed its course centuries ago; by using the terminus points of the eastern and western walls, historians estimate that the southern wall was 2,460 m (8,070 ft) long. The overall walled enclosure formed a rectangular shape, yet with some disruptive curves due to topographical obstructions. Like Chang’an, Luoyang had twelve gatehouses, three for each side of the wall, while each gatehouse had three gateway entrances which led to major avenues within the city. The rammed earth foundational platforms of religious altars and terraces still stand today outside of the walled perimeter of Luoyang, dedicated to the worship of deities and where state sacrifices were conducted. They were approached by long ramps and once had timber halls built on top with verandas on the lower levels.

Timber was the chief building material in Han architecture. It was used for grand palace halls, multi-story towers, multi-story residential halls, and humble abodes. However, due to wood’s rapid decay over time and susceptibility to fire, the oldest wooden buildings found in China (i.e. several temple halls of Mount Wutai) date no earlier than the Tang dynasty (618–907 CE). Architectural historian Robert L. Thorp describes the scarcity of Han-era archaeological remains, as well as the often unreliable Han-era literary and artistic sources used by historians for clues about non-existent Han architecture. What remains of Han-dynasty architecture are ruins of brick and rammed earth walls (including aboveground city walls and underground tomb walls), rammed earth platforms for terraced altars and halls, funerary stone or brick pillar-gates, and scattered ceramic roof tiles that once adorned timber halls. Sections of the Han-era rammed earth Great Wall still exist in Gansu province, along with the Han frontier ruins of thirty beacon towers and two fortified castles with crenellations. Han walls of frontier towns and forts in Inner Mongolia were typically constructed with stamped clay bricks instead of rammed earth.

Thatched or tiled roofs were supported by wooden pillars, since the addition of brick, rammed earth, or mud walls of these halls did not actually support the roof. Stone and plaster were also used for domestic architecture. Tiled eaves projecting outward were built to distance falling rainwater from the walls; they were supported by dougong brackets that were sometimes elaborately decorated. Molded designs usually decorated the ends of roof tiles, as seen in artistic models of buildings and in surviving tile pieces.

How to remember Koxinga: Contested legacy