In order to facilitate commerce and communication as well as speed the process of tax collection and movement of military troops, the Han government sponsored the building of new roads, bridges, and canal waterways. These include repairs and renovation work on the Dujiangyan Irrigation System of Sichuan and Zhengguo Canal of Shaanxi, both of which were built by the previous State of Qin. Accepting the proposal of Ni Kuan (zh:兒寬), in 111 BCE Emperor Wu commissioned Er to lead the project of creating extensions to the Zhengguo Canal that could irrigate nearby terrain elevated above the main canal. Since a large amount of silt had built up over time at the bottom of the Zhengguo Canal (causing flooding), in 95 BCE another project was initiated to tap irrigation waters from further up the Jing River, requiring the dredging of a new 100 km (62 mi) long canal following a contour line above the Zhengguo. The Han state also maintained a system of dikes to protect farmland from seasonal floods.

Roadways, wooden bridges, postal stations, and relay stations were occasionally repaired, while many new facilities such as these were established. As written by Han authors, roads built during the Han were tamped down with metal rammers, yet there is uncertainty over the materials used; Joseph Needham speculates that they were rubble and gravel. The widths of roads ranged from narrow footpaths where only a single horse or oxen could pass at once to large highways that could accommodate the simultaneous passage of nine horse-drawn chariots abreast. Fortified Han roadways were built as far west as Shanshan (Loulan) near the Lop Desert, while Han forces utilized routes that traversed north of the Taklamakan Desert towards Kashgar. A vast network of roads, fortified passes, and wooden bridges built over rushing torrents in steep gorges of the Qin Mountains was consolidated during the Han, known as the gallery roads. During the reign of Emperor Wu, roads were built to connect newly conquered territories in what is now Yunnan in the far southwest as well as the Korean Peninsula in the far northeast. 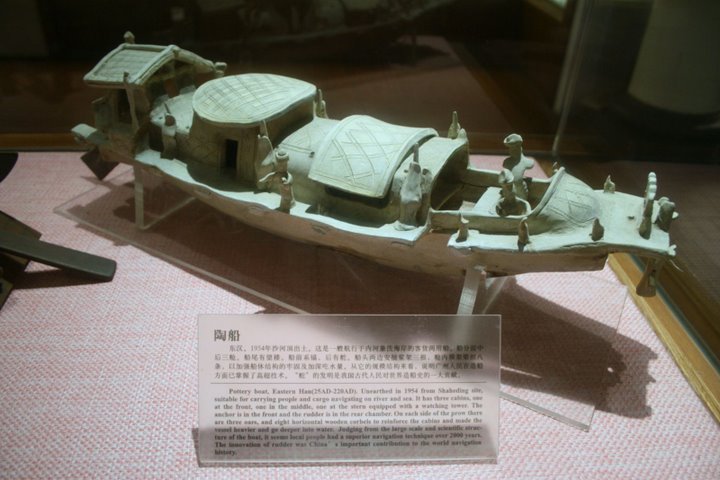 One of the most common bridge-types built during the Han was the wooden-trestle beam bridge, described by literary sources and seen in reliefs carved on tomb bricks. Evidence for arch bridges is elusive: one outside of Chengdu’s south gate is claimed to date to the Han period, while that built by Ma Xian (馬賢) (fl. 135 CE) was certainly a beam bridge. In artwork, a relief sculpture from a Han tomb in Sichuan province shows an arch bridge with a gradual curve, suggesting that it is segmental, although the use of such bridges are not entirely confirmed. Although there are rare references to simple suspension bridges in Han sources, these are only mentioned in connection with travels to foreign countries in the Himalaya, Hindukush and Afghanistan, demonstrating the antiquity of the invention there. Floating pontoon bridges made of boats secured by iron chains were built during the Han (some even spanning the Yellow River and Yangzi River) and were most often employed for military purposes since they could be easily assembled and then disassembled.

In 1975, an ancient shipyard discovered in Guangzhou is now dated to the late 3rd century BCE, made during either the Qin dynasty (221–206 BCE) or early Western Han dynasty. It had three large platforms capable of building wooden ships that were 30 m (98 ft) long, 8 m (26 ft) wide, and had a weight capacity of 60 metric tons. Another Han shipyard in what is now Anhui province had a government-operated maritime workshop where battle ships were assembled. The widespread use of iron tools during the Han dynasty was essential for crafting such vessels.

The southward expansion of the Han dynasty led to new trade routes and diplomatic contact with foreign kingdoms. In 111 BCE, Emperor Wu conquered the Kingdom of Nanyue in what is now modern northern Vietnam and Guangdong, Guangxi, Yunnan; thereafter he opened up maritime trade to both Southeast Asia and the Indian Ocean, as foreign merchants brought lapis lazuli, pearls, jade, and glasswares to the Han Empire from this southern sea route. When a group of travelers from the Roman Empire (allegedly diplomats of Marcus Aurelius but most likely Roman merchants) came to the Han court in 166 CE, they allegedly came from this southern trade route. By at least the 1st century CE — as proven by Eastern Han ceramic miniature models of ships found in various tombs — the Chinese would have been able to brave distant waters with the new steering invention of the stern-mounted rudder. This came to replace the less efficient steering oar. While ancient China was home to various ship designs, including the layered and fortified tower ship meant for calm waters of lakes and river, the junk design (jun 船) created by the 1st century CE was China’s first seaworthy sailing ship. The typical junk has a square-ended bow and stern, a flat-bottomed hull or carvel-shaped hull with no keel or sternpost, and solid transverse bulkheads in the place of structural ribs found in Western seacrafts. Since the Chinese junk lacked a sternpost, the rudder was attached to the back of the ship by use of either socket-and-jaw or block and tackle (which differed from the later European pintle and gudgeon design of the 12th century). As written by a 3rd-century author, junks had for-and-aft rigs and lug sails.

Although horse and ox-drawn carts and spoke-wheeled chariots had existed in China long before the Han dynasty, it was not until the 1st century BCE that literary evidence pointed to the invention of the wheelbarrow, while painted murals on Han tomb walls of the 2nd century CE show the wheelbarrow in use for hauling goods. While the ‘throat-and-girth’ harness was still in use throughout much of the ancient world (placing an excessive amount of pressure on horses’ necks), the Chinese were placing a wooden yoke across their horses’ chests with traces to the chariot shaft by the 4th century BCE in the State of Chu (as seen on a Chu lacquerware). By Han times, the Chinese replaced this heavy yoke with a softer breast strap, as seen in Han stamped bricks and carved tomb reliefs. In the final stage of evolution, the modern horse collar was invented in China by the 5th century CE, during the Northern Wei period.