Xi Shi (Hsi Shih, 506 BC – ?) was one of the renowned Four Beauties of ancient China. She was said to have lived during the end of Spring and Autumn period in Zhuji, the capital of the ancient State of Yue. Her name was Shi Yiguang (施夷光). 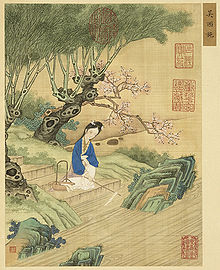 King Goujian of Yue was once imprisoned by King Fuchai of Wu after a defeat in war, and Yue later became a tributary state to Wu. Secretly planning his revenge, Goujian’s minister Wen Zhong suggested training beautiful women and offering them to Fuchai as a tribute (knowing Fuchai could not resist beautiful women). His other minister, Fan Li, found Xi Shi and Zheng Dan, and gave them to Fuchai in 490 BC.

Bewitched by the beauty and kindness of Xi Shi and Zheng Dan, Fuchai forgot all about his state affairs and at their instigation, killed his best advisor, the great general Wu Zixu. Fuchai even built Guanwa Palace (Palace of Beautiful Women) in an imperial park on the slope of Lingyan Hill, about 15 kilometres (9.3 mi) west of Suzhou. The strength of Wu dwindled, and in 473 BC Goujian launched his strike and completely routed the Wu army. King Fuchai lamented that he should have listened to Wu Zixu, and then committed suicide.

In the legend, after the fall of Wu, Fan Li (范蠡) retired from his ministerial post and lived with Xi Shi on a fishing boat, roaming like fairies in the misty wilderness of Taihu Lake, and no one saw them ever again. This is according to Yuan Kang’s Yue Jueshu (越绝书). Another version, according to Mozi, is that Xi Shi eventually died from drowning in the river.

Wang Qiang (王嬙), more commonly known by her stylistic name Wang Zhaojun， Born in Baoping Village, Zigui County (in current Hubei Province) in the Western Han Dynasty (206 BC–8 AD), she was sent by Emperor Yuan to marry the Xiongnu Chanyu Huhanye (呼韓邪) in order to establish friendly relations with the Han Dynasty through marriage. 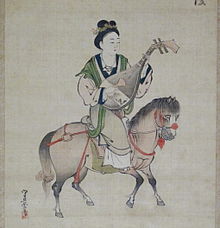 In 33 BC, Huhanye Chanyu visited Chang’an as part of the tributary system that existed between the Han and Xiongnu governments. He took the opportunity to request to become an imperial son-in-law, which is recorded by Lou Jingde under Emperor Gaozu of Han. As Queen Mother Lü had only one daughter, she did not have the heart to send her so far away. Typically the daughter of a concubine would then be offered, but unwilling to honour Huhanye with a real princess, Emperor Yuan ordered that the plainest girl in the harem be selected. He asked for volunteers and promised to present her as his own daughter. The idea of leaving their homeland and comfortable life at court for the grasslands of the far and unknown north was abhorrent to most of the young women, but Wang Zhaojun accepted. When the matron of the harem sent her unflattering portrait to the Emperor, he merely glanced at it and nodded his approval. Only when summoned to court was Wang Zhaojun’s beauty revealed. The Emperor considered retracting his decision, but it was too late by then, and he regretfully presented Wang Zhaojun to Huhanye, who was delighted. Relations with the Xiongnu subsequently improved, and artist Mao Yanshou was subsequently executed for deceiving the Emperor.

When Huhanye died in 31 BC, Wang Zhaojun requested to return to China. Emperor Cheng, however, ordered that she follow Xiongnu levirate custom and become the wife of the next Chanyu, the eldest brother (or her stepson, born by her husband’s first wife) of her husband. In her new marriage, she had two daughters.

Statistics show that there are about 700 poems and songs and 40 kinds of stories and folktales about Wang Zhaojun from more than 500 famous writers.

Diaochan was one of the Four Beauties of ancient China. Unlike the other three beauties, however, there is no known evidence suggesting her existence; Although she is mostly a fictional character, it was mentioned in Chinese historical records that Lü Bu had a secret affair with one of Dong Zhuo’s maids and was constantly afraid of being discovered, and this was one of the reasons why Lü killed Dong in 192. The maid’s name was not recorded in history. Diaochan is best known for her role in Luo Guanzhong’s historical novel Romance of the Three Kingdoms, which romanticises the events in the late Eastern Han dynasty and the Three Kingdoms period. In the novel, she had a romance with the warrior Lü Bu and caused Lü to betray and kill his foster father, the tyrannical warlord Dong Zhuo. The name “Diaochan”, which literally means “sable cicada”, is believed to have been derived from the sable tails and jade decorations in the shape of cicadas which adorned the hats of high-ranking officials in the Eastern Han dynasty.

Yang Yuhuan (June 719 — July 756), often known as Yang Guifei (杨贵妃; literally: “Imperial Consort Yang”) known briefly by the Taoist nun name Taizhen (太真), was known as one of the Four Beauties of ancient China. She was the beloved consort of Emperor Xuanzong of Tang during his later years.

During the An Lushan Rebellion, as Emperor Xuanzong and his cortege were fleeing from the capital Chang’an to Chengdu, the emperor’s guards demanded that he put Yang to death because they blamed the rebellion on her cousin Yang Guozhong and the rest of her family. The emperor capitulated and reluctantly ordered his attendant Gao Lishi to strangle Yang to death.

In 733, fourteen-year-old Yang Yuhuan married Li Mao, the Prince of Shou and the son of Emperor Xuanzong and Consort Wu. She thus carried the title of Princess of Shou. After Consort Wu died in 737, Emperor Xuanzong was greatly saddened by the death of his then-favorite concubine. Some time after that, however, Princess Yang somehow came into Xuanzong’s favor and the Emperor decided to take her as his consort. However, since Princess Yang was already the wife of his son, Emperor Xuanzong stealthily arranged her to become a Taoist nun, with the tonsured name Taizhen, in order to prevent criticism that would affect his plan of making her his concubine. Yang then stayed, for a brief moment, as a Taoist nun in the palace itself, before Emperor Xuanzong made her an imperial consort after bestowing a new wife on his son Li Mao. Yang became the favorite consort of the Emperor.